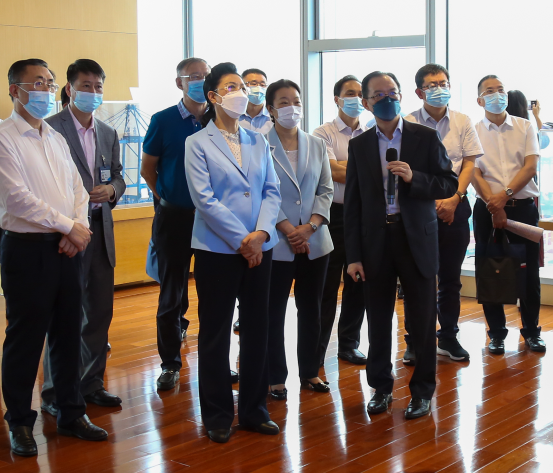 Ms. Lin Jie and her delegation toured the port and were briefed on the the development of YANTIAN, including the construction of the terminal, which has won six national engineering awards, including the Luban Award, the first large-scale project for converting the diesel-driven Rubber-tyred Gantry Cranes (RTGCs) to run on electric power, and the largest mobile shore power system in China. On behalf of YANTIAN, Lawrence Shum expressed his warm welcome to Ms. Lin Jie and her delegation and introduced the important role played by the cooperation between Shenzhen and Hong Kong shareholders in the development of YANTIAN over the past 28 years, especially the strong support from the Yantian Port Group and the network resources of 52 ports in 26 countries shared by Hutchison Ports Group. In the subsequent symposium, Lin Jie listened to YANTIAN's ideas and suggestions on how to enhance the comprehensive competitiveness of the international shipping industry in Shenzhen. Ms. Lin Jie spoke highly of the development achievements of YANTIAN and thanked YANTIAN for its positive contribution to the economic and social development in Shenzhen as a model of Shenzhen-Hong Kong cooperation. She pointed out that in the golden development period driven by the development of the Guangdong-Hong Kong-Macao Greater Bay Area, Shenzhen Demonstration Zone, and Shenzhen Special Economic Zone, it was necessary to seize the opportunity, catch up with the trend, and make innovations. She said, YANTIAN should carefully study the keynote speeches and instructions made by General Secretary Xi Jinping on shipping power and port development to further lead the competitiveness improvement of the international shipping industry in Shenzhen. The municipal CPPCC would provide more support and put forward useful countermeasures and suggestions for Shenzhen to accelerate the construction of a world maritime center city. 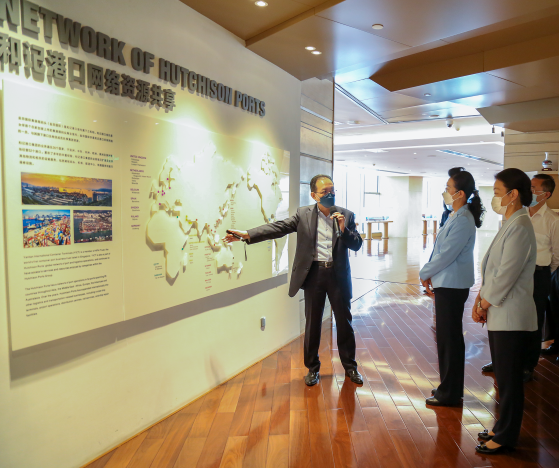 Lawrence Shum said that YANTIAN would continue to do its best in both COVID-19 prevention and control and enhancement of port production, fully support the Hong Kong to fight the epidemic, and facilitate the smooth flow of logistics for international trade in the Greater Bay Area. Under the strong support of Shenzhen CPPCC, governments of both Shenzhen and Hong Kong, YANTIAN launched the "one-time pilotage" in Mirs Bay on June 1, which was a great breakthrough in deepening the maritime cooperation, ensuring the smooth flow of vessel traffic and international trade logistics in the Greater Bay Area, and enhancing the international competitiveness of ports in the Pearl River Delta. He also reported to the delegation on the issues encountered by the port and shipping logistics industry regarding cross-border e-commerce, cold chain, supporting land and so on, and put forward his ideas on addressing these issues and matters requiring government support, which was actively responded by members of the delegation. Lawrence said, in the future, YANTIAN would not only continue to contribute to the smooth and stable flow of the supply chain and industrial chain in the Greater Bay Area, but also optimise its role as a major port to work together with government agencies and partners to drive the development of shipping logistics industry to boost the maritime economy in Shenzhen with the port industry and shipping logistics industry reinforcing each other.

Jia Xingdong, Deputy of Shenzhen CPPCC Standing Committee and Director of the Economic Committee presided over the symposium. The field trip was accompanied by heads of relevant functional departments of YANTIAN.